Voices of Resistance - The Mixtape vol. 1 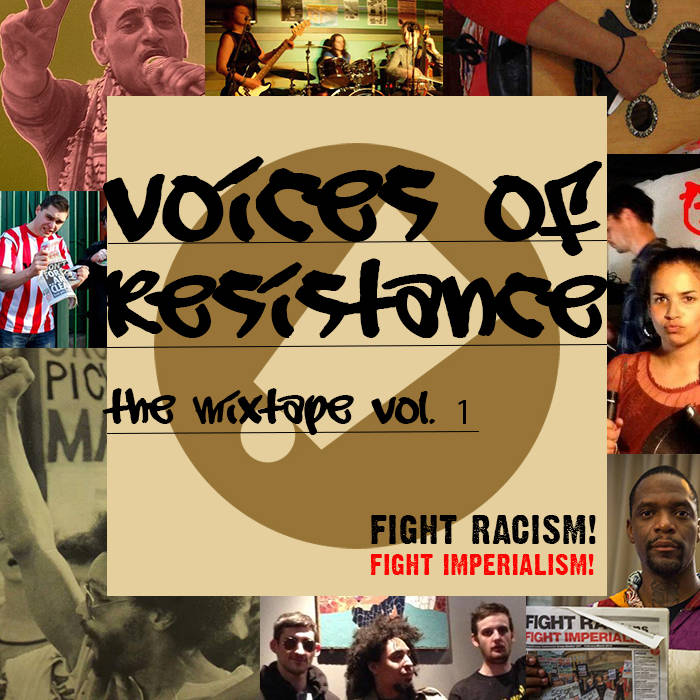 
Voices of Resistance opens the stage to hear from revolutionary youth in Britain and around the world. Presented by the Britain-based activist organisation Fight Racism! Fight Imperialism!, a range of cultural and musical alternatives are united in this mixtape of original material. This comes at an important time as the British ruling class drive forward with Victorian-style cuts in welfare and criminalisation of those most dependent on it. The millionaire politicians and their allies use racism as an age old tool to divide and rule the working class. Internationally, they push for more war and bloodshed to save their sinking system, while defending the apartheid regime of Israel.

And yet, with organisation, inspired by poem and song, all of the division, silence and indifference to today’s situation can be exposed and overcome. The global crisis of capitalism and imperialism is expressing itself throughout the world in wars and revolutions. Despite everything, the people of Palestine refuse to give up their revolutionary fight. The struggle for socialism in Latin America, led by Cuba and Venezuela, is meeting people's needs and giving hope to millions across the world. An alternative truly does exist! People united in voice and spirit can never be defeated! \

Oppose the war on welfare!
Victory to Palestine!
Join the voices of resistance!

RENU is a London-based world percussionist, composer and producer. Her track We Rise first appeared on her 2012 album Midnight Radio and includes lyrics and vocals by ROSINA, one half of Toronto based electro duo LAL.

MC Verbal Wisdam has performed at FRFI's Rebel Music nights in Manchester and is gaining a reputation as a conscious, political rapper. The track How was written especially for the Voices of Resistance mixtape and was produced by WRZL.

Rot Jaws are a band specialising in 'punk motivated sound and politics' and are fronted by lyricist Sara Mahmoud. Their song Free Talha Free Babar comes from the 2013 EP of the same name and is dedicated to the struggle against 'anti-terror' imprisonment and criminalisation of the Muslim community. They are joined by Gertrude, an all-female post punk group, who rage against social control in their track Probationary Citizen. In early 2014 both Rot Jaws and Gertrude performed at a benefit gig for the Focus E15 Mothers housing campaign in East London.

Cal Shaw, Dido Porter and James R Bell are poet-activists involved in FRFI in Newcastle. Their work features performance nights organised through the RED blog for revolutionary politics and art. Here, their work is presented to contrast the radical music on our mixtape. Cal Shaw tells the story of the Newcastle 14, anti-racist protesters arrested in 2013 with the collaboration of local 'anti-facists' loyal to the Labour Party. Picking up on that theme, James R Bell offers a powerful poetic presentation of Labour's bloodsoaked history. Dido Porter speaks up against sexism and offers a renewal of anti-capitalist militancy to traditional ideas of feminism.

Domi O'Hara is a Glaswegian activist and songwriter whose songs have literally travelled the world. In December 2013 he joined a group of young FRFI activists in the World Federation of Youth and Students in Quito, Ecuador. He is also active in the Glasgow Defence Campaign for democratic rights and against political policing. His song Sunday's No a Rest Day is testament to this political campaigning and calls for a new culture of political activity on the streets of Britain. Edinburgh-based Mancunian filmmaker Leon F. Brehony sneaks into our Scottish contingent with his folk flavoured resistance track Bulletproof Vest.

We are extremely proud to present a number of tracks in solidarity with the struggle of Palestine. The fight to boycott apartheid Israel remains an important part of FRFI's work in Britain. In an interview with Dead Prez after their Manchester show in early 2014, rapper M1 told us why he supports the Palestinian cause. We present part of this interview here, followed by tracks from Palestinian musicians Doc Jazz and Reem Anber.

Doc Jazz is a surgeon and self-taught multi-instrumentalist. His songs mix elements of rock, rap, jazz, funk and Arabic styles and his website The Musical Intifada is dedicated to promoting action in solidarity with the Palestinian struggle. Reem Anber is an oud player based in Gaza. As we release her Taqaseem, Israel enforces the blockade of Gaza, with the support of Britain, the US and the military government in Egypt. There are no recording studios in Gaza, yet musicians like Reem maintain their musical traditions in the face of continuing Israeli aggression.

Dirty North are well known in Manchester for supporting Stone Roses during their comeback shows in Heaton Park. In front of a crowd of thousands, singer Johnny launched into Money and Guns, a song written after Britain's invasion of Iraq. On this FRFI mixtape, they collaborate with blues-influenced songwriter Jim Adama in Down and Broke, a recession anthem telling the real life story of poverty faced by growing numbers of young people at the hands of austerity capitalism.

Staying up north, Class Actions are a group of Salford-based socialist rappers and activists. Their track Rip Up the Sun is dedicated to the Hillsborough justice campaign and was performed recently at the Barton Moss anti-fracking camp during the 25 year anniversary of the tragedy. The song deals with the shameless anti-working class coverage presented by the Sun newspaper at the time and live performances feature shredding of issues of the paper!

FRFI's Mark Moncada and Louie B are active in Newcastle and Manchester respectively. This recording of Mark Moncada's song Smash the Bedroom Tax comes from a live performance at a Newcastle Rebel Music night and features crowd participation – a hallmark of Mark's militant, protest-driven, songs. Louie B has featured in Manchester bands The Scrotes and Frazer King and this version of Meltdown is a call to action to combat cutbacks in working class communities.

The late Ken Bodden (also known as Ken Hughes) was a Panama-born socialist and musician who wrote many great protest songs during his time working with FRFI. He was a leading member of the anti-apartheid pickets of the South African embassy in London in the 1980s and is missed by everyone who knew him, comrade and friend alike. Here we pay tribute to Ken with his excellent song Baobab Tree.

Fight Racism! Fight Imperialism! is a newspaper and campaigning organisation in Britain, fighting capitalist austerity, racism and war. We campaign in solidarity with oppressed people around the wold, from occupied Palestine to revolutionary Venezuela and socialist Cuba. In Britain we call for opposition to the imperialist Labour Party and fight to build a new socialist movement. ... more

Bandcamp Daily  your guide to the world of Bandcamp